Kali: We were moving from a small town called Omiš, just out of Split, to one of the islands, Korčula. We took a ferry ride from Split to a tiny town on the island. From there we took a public bus. The driver was very unfriendly, and said he didn’t even know of the little town we were heading to, called Račišće. [Ra-chi-che]

Jarik: Thus far on our adventure, we have had a number of truly memorable travel experiences. This turned out to be one of them. We were supposed to get an Uber from our apartment in Omiš to Makarska, a town 20km further south along the coast. From there we were to catch a ferry to the island of Korčula. From Korčula Town, a regular local bus service could take us to our destination. It was all very straight forward. However, Uber dried up in Omiš; we eventually took a bus north to Split;  got a much longer ferry ride to Vela Luka (on the other side of Korčula island) and boarded a bus not really going to where we wanted to go…

Kali: MapsMe showed a walking trail from Pupnat, a town that the bus passes through, to Račišće. It was around 4km, all downhill, and it would take us about 50 minutes to reach our destination. This was absolutely nothing compared to hikes that we have done before, even with all our luggage. So we ended up getting off the bus at Pupnat. (The Afrikaans readers will enjoy the name!) 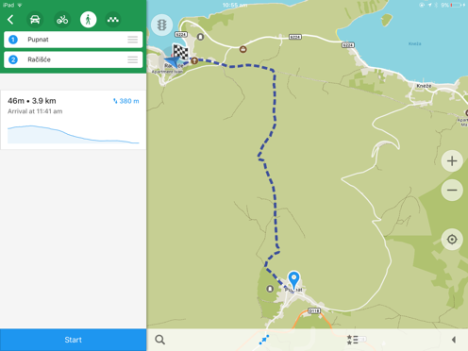 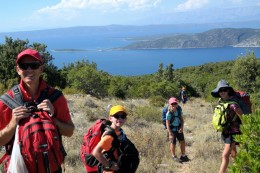 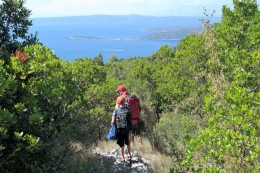 Jarik: Four kilometres – a breeze, although it was now about 1pm. There was even a sign indicating the walking trail close to the bus stop where we got off.

Kali: I started off walking in my flip flops (thongs) as I imagined this to be a comfortable walk. However, we had to get over massive boulders and rocks, and my flip flops didn’t even last a full hour. They had completely disintegrated and were totally useless. Disheartened, I dug out my runners from deep in my bag, and put them on my black, bleeding feet. Then we came to a really bushy and scrubby part of the trek. Also notice how I said my other shoes didn’t even last an hour, that is because by now we have been walking for more than two hours and the GPS showed that we still had 2.3kms to go! 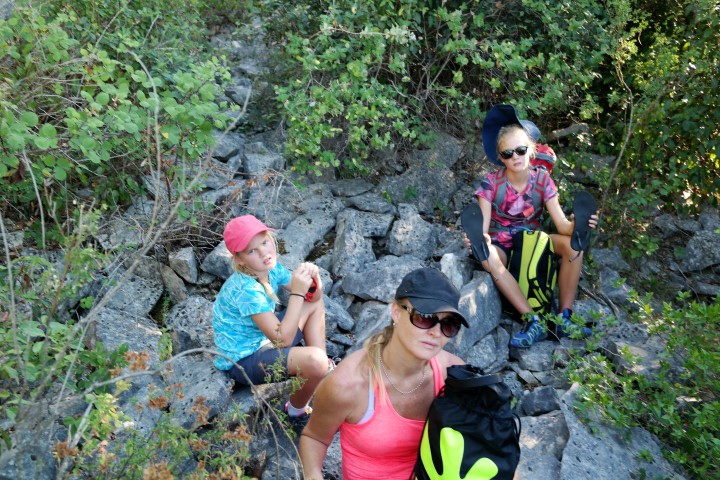 Jarik: About 500m outside the village, the walking track gave way to a very rugged and rocky trail that was heavily overgrown. It was also by now apparent the “downhill walk” was actually quite a steep descent towards the glistening blue ocean that was very far off in the distance!

Kali: Our slow progress was not because we are slow hikers, but because we had wandered through various fingers splitting off from the track, all with our heavy backpacks. MapsMe couldn’t detect our location precise enough to be able to follow the track. Four hours passed and by now we were not only fighting our way over the boulders and rocks, but had a run-in with some aggressive bees as well – I got stung twice! We ended up just making our own trail through thick thorn bushes. Our legs, arms, faces, hands, feet and backs got badly scratched and our shirts and backpacks were also torn. It was horrendous! What made it even worse was that, after the 1st hour and in the middle of the day, all our water had completely run out and there was no house or farm in sight.

Jarik: After the second hour of very slow progress, following what seems to be the overgrown ruins of a winding rock boundary wall of some sorts, Mariza and I both realised that we still had a couple of hours of hard going ahead of us. It would be too difficult to go back the way we came. The only alternative was to continue pushing through the thorny shrubs and vines to slowly find a way to the bottom. We were totally ill prepared and just hoping that we would make it down before dark. Everyone was tired and hungry but we had to make sure that our troop’s attitude remained positive or we would never get there.

Kali: We all celebrated, some even cried, as soon as we stepped onto the dirt road that meant civilisation was within reach. This was definitely one of the most challenging treks that we have ever done. It took us more than five hours! I was feeling very sick at this stage. (We only had oatmeal in the morning and dry bread earlier in the day with very little water through the heat.) We climbed through a fence to fill our water bottles at an abandoned house and continued down the single lane road towards Račišće. Our apartment was delightful. It was such a relief to find a clean, neat and beautiful little apartment close to the cool blue ocean! We had an amazing welcome from our incredible hosts. From the picture to follow, you’ll see why the first thing we did was swim!!! 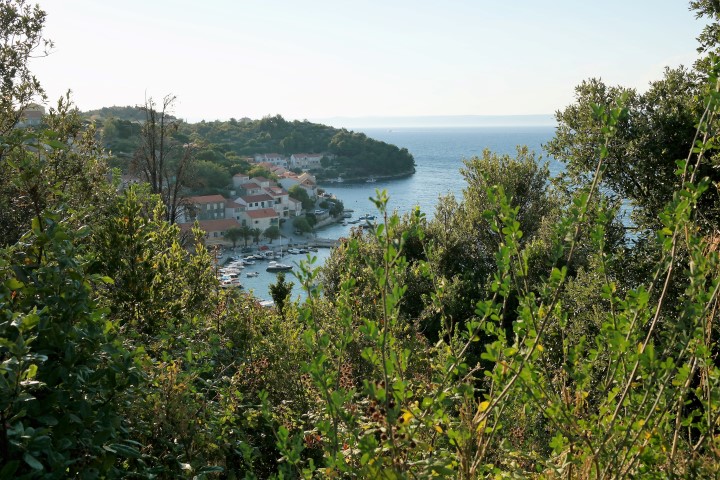 Jarik: I am so proud of my family! Not a single part of the day’s journey worked out as planned. We had to just adjust and find a way, even if it meant doing one of the toughest “hikes” we had ever done. The rewards were spectacular. Račišće is a forgotten  little piece of paradise in a beautiful corner of the crystal ocean. The conversations during and after the day’s ordeal were absolutely priceless. How fortunate we are to share this with our children.

2 thoughts on “Bundu Bashing in Korčula”