Based on sound scientific method, that includes a statistically significant number of independent and repeatable observations, I offer the following “natural laws” to describe the seemingly erratic and constant vehicle horn usage on Indian roads.  In successive order:

“beep” [single, short] = Polite notification to fellow road user, whether pedestrian or other, that a vehicle is approaching (independent of direction of approach). This is sometimes reciprocated by the vehicle that is being approached.

“beep beep BEEP” or “beep BEEP beep” [three, one long and accentuated] = Given if first vehicle does not immediately oblige to previous signal. Regardless of any reciprocated signalling (which can be vigorous), the approaching vehicle now surges forward giving rise to a challenge of roadway possession. The ensuing duel can take on a level of aggression that can force oncoming traffic to move to the side of the road or even come to a complete stop (mid road).

“BEEP” [one, long and accentuated] = The final signal in the series. This indicates that the victorious road user has succeeded in pushing past its opponent to claim the road space. It will now continue by cutting-in right in front of the losing vehicle, only to come to a sharp halt to avoid hitting a cow or losing an axle in a pothole.

Surprisingly, the Laws of Horn Engagement carries a form of logic and poetic simplicity.  This, however, is obscured by the fact that any given five metre section of roadway can accommodate between seven and twelve users in any particular direction, all active in different stages of the horn engagement laws. Simultaneous interactions with more than one co-road users are also not the exception.  This gives rise to a chaotic cacophony that sets the uninitiated on the front of their seats, waiting for the inevitable metal crumpling sounds that usually follows such overt and incessant horn usage. After a month in India, one, however, develops the capability to simply sit back and enjoy the symphony. 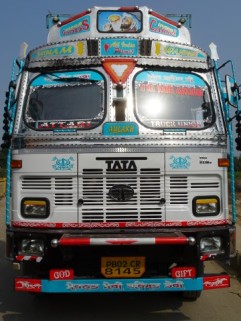