It was eight o’clock in the morning and there were two grey scooters parked on our doorstep. Eagerly we all went out.

Before we could get going on today’s adventure, Mum and Dad, who have never before driven scooters, had to learn how. Dad did a lot better than Mum. Us children were laughing at and mocking her about not going on her scooter. Forty minutes later we were all set to go. 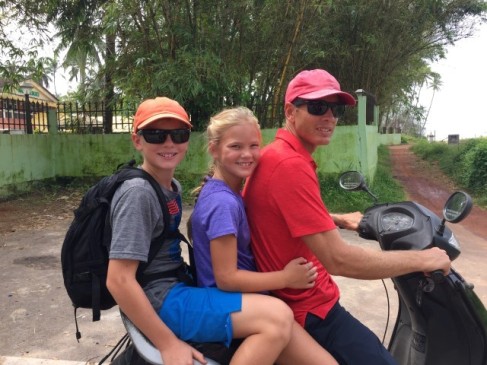 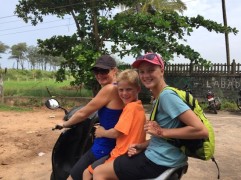 So with three per scooter, we started down the coastal road to Colva, the first village we were going to visit. The road was uneven and full of potholes, if we were not able to swerve around them, we were forced to bounce through. Despite that, we arrived safe and sound in Colva. It is one of the busiest villages along the coast of southern Goa. In Colva we parked our scooters and strolled onto the beach. The bright patterns and designs in a nearby clothes stall caught our attention, so we went inside for a closer look. We were all feeling a little bit hungry and decided it was time for a late morning snack. A few vegetable patties and samousas later, we were on the road again and found ourselves going around the crazy Colva roundabout. (I honestly thought we would not make it alive to the other side!!) There were cars trucks and motorcycles along with all the animals.

We arrived in Benaulim (the village we stayed in two days before) to visit Auntie Peggy on her sixty-sixth birthday. Auntie Peggy invited us inside and we had a drink and a quick chat. We were planning to come back when the kids came home after school, but now it was time to set off again.We bounced through the coastal lanes and streets, driving through Varca, Carmona and Cavelossim. About four kilometres south of Cavelossim, at the end of the road, we sat down on a bench near the mouth of the river Sal. We watched all the fishermen on the opposite bank and all the boats lying at anchor. It was great to rest my backside from the bumping.

It was about 2:30pm when we drove a kilometre north to the Fisherman’s Wharf Restaurant. There we had a lovely lunch overlooking the river.

Just south of Cavelossim we bought two one litre water bottles of fuel from an old lady at a stand by the roadside.  We continued on our northward and homeward journey.

Later we were back in Benaulim to celebrate with Auntie Peggy, while all the children were there too. This time we had cake, soft drinks and chips. All of the neighbouring children came to play football with us and we were sad to say goodbye to our friends. Jemene (the mother) sent us home with bags full of delicious homemade curries.

A few bumpy kilometres later, we were back at our villa just outside Betalbatim. We had all survived a fabulous day.