You will either love her and adore her, or you will hate and reject her. She is a place like no other. It is easy to hate her and be blind to her uniqueness and only see the things she lacks or must improve upon. It is somewhat hard to ignore these things and only see her beauty.

I want to love and adore her. I want to know her and her people who are either sustained and comforted by her or strangled by her harshness. She is unique, colourful, insane, chaotic, alive with culture, and bustling with mysteries and adventures. I long to meet the one that will challenge, excite and fascinate me. Your attitude towards her is crucial to what you will discover. I have chosen to wrap my arms around her and all she’s about. I have decided to embrace India!

It whacked me straight in my face, dried my lips and blew my hair back. The hot wind that blows through her vast countryside hit us as soon as we stepped off the plane. Our six fair heads and pale bodies stood out among the masses that swept through the airport. There are always dark eyes inspecting us from all angles. The locals seem to be intrigued and fascinated by this strange family.

When I smiled and waved at two little girls, dressed beautifully in their colourful sarees, they grinned, hugged each other and waved back a little shyly. Then they ran off excitedly to tell their mother, with lots of enthusiastic pointing, about the strange girl who had waved at them. Some people have shown us pictures of a little girl that looks quite a lot like Eulain. She is a Bollywood star and the locals are completely convinced that Eulain is her blonde twin.

We headed towards the Delhi train station via the metro. We must’ve been looking a little bit confused, because a man came to us and asked if he could help us. He was kind and friendly, however, we would only later learn that there is always a reason for this. One of the very first things I noticed about the locals, is that they are willing to do anything and everything with only one single condition. They want something from you. Usually money. At the sight of a tourist, they immediately see an opportunity to give and to gain. They will approach you, with the kindest attitude and ask if they can help you. They do not mention anything about money. They just offer their help and advise. In the end, however, they will always expect something.

The man led us to the platform and onto the train and asked all sorts of questions. ‘Where would you like to go? Where are you staying? What are you doing in India? For how long?’ He was trying to convince us to get off at a stop that was not the New Delhi Train Station. This, and a few other things, started to rouse some suspicion. Why had he gotten on the train if he ‘worked for the station’? Why did he want to force us to get off at the wrong station? It was hard to say that we did not need his help, as he was being extremely kind and helpful. In the end we had to be firm. We got off at the Delhi Train Station and ignored what he was trying to tell us. My suspicion was that he was trying to lead us into a trap.

New Delhi train station was like a beehive! Masses of people were milling around the platforms and tiny stalls. Others were waiting with their bags of luggage, lying on the hard, dirty floor, each with their sandals next to them.
In India, there is no such thing as a line. Everything happens in mobs. Even though there are bars and barriers to try to enforce some order, people simply climb over, or push past. I have discovered a new way of buying tickets! Three small ticket offices were at the end of metal bars. It could’ve been very neat and efficient… but it definitely wasn’t! Our team marched into one of the ‘lines’. There were people hanging over the bars and they reached towards the small window. It was a clutter of yelling, grabbing, climbing and of course staring.

In India you have shoulders for a reason. Unless you never want to get your tickets, with people pushing past you, you must use your shoulders! We did this very well… for beginners. Every time someone wanted to squeeze past us to the front of the line, we would form a wall that completely blocked the line! After pushing, shoving and asking, the person would be so frustrated that he would join another ‘line’. Us four were the protectors and guards so that Mum and Dad could buy the tickets.

It took another hour until we finally made our way out of the crowd with the tickets in our pockets. Dodging the people both on the floor and not, we made our way to the platform. Our train to Agra, where we would be staying tonight, arrived at the station at 2:30pm. We bought some take away curry and roti, serving as both breakfast and lunch.

As we were sitting on the dirty platform floor, we saw trains roll into the station with people literally hanging out of the open doors and windows. Seeing so many people squeezed into such a small space immediately made me feel claustrophobic. People would even jump out as the train was still moving quite fast! I could tell everyone silently hoped that we would not be on one of those for four long hours. To the great relief of all of us, we weren’t. After putting away our bags, and making ourselves at home in our air conditioned compartment, we sat down together to have our first meal of the day. It was really good curry! However, we all expected it to be more spicy. 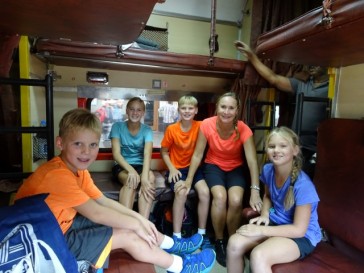 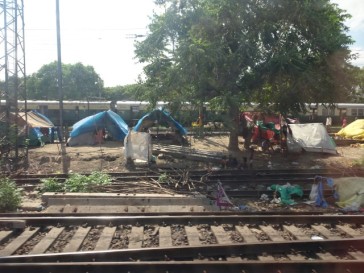 Four hours later, after a short nap, we arrived at Agra Cant Station. It wasn’t quite as busy as Delhi Station, but still rather crowded. With the help of a friendly man, we found a minibus taxi. Our driver’s name was Lucky and we chatted and talked about Agra as we headed through the crazy afternoon traffic.

The roads in India are even more of a mess than the stations! Tuk-tuks, motorbikes, horse carts, wheelbarrows, bicycles, people, dogs, goats, monkeys and cows in the middle of the road. It is chaos! No driver’s licence required, just guts. Lucky broke a sweat and swore when at one time he had to brake very suddenly in order not to hit a cow.

We turned into a side street with stalls and tuk-tuks lining the road. Our hotel, Optimum Tara Place was among the chaos. It felt great to not feel sticky and dirty after a nice cold shower. (There was no hot water!) We had a delicious dinner at the hotel restaurant. And yes, as you can guess, Grandpa Gordon, I had Butter Chicken! We saved a spot for you, but you didn’t come!

Our introduction to India has been both a shock and a massive eye opener. Definitely something I will never forget. I am so glad I can experience it with my amazing, brave and adventurous family. Not many others would have done all this with me! I look forward not only to tomorrow, but the rest of the adventure that lies ahead.

Until next time,
-Kali-

6 thoughts on “Introduction to India”