While staying in the forgotten old village of Truske, we visited the historical centre of a costal town called Piran. It is located on a peninsula, jutting out sharply into the Adriatic. We had to park our car in a parking garage, about a kilometre from the city. Many towns and villages in this area have this same system, as the streets are too small and narrow for cars to enter- only bikes and scooters can get in and out.

Today was once again one of those days you wish you were backpacking Antartica instead of facing a heatwave in Istria. The sun, in the cloudless sky, blazed down on us as we walked to the city

gates. Esto, having had a terrible tummy bug for the last three days, refused to walk even a single step. With no other choice, mum hoisted him onto her back. Dad and I also took turns carrying him through the streets.

We wandered through cobble stone streets with old pastel coloured buildings on each side. Without being too touristy, or overcrowded, Piran had a charm to it that I immediately loved! The little street side cafes and restaurants were filled with people. Each little street and alleyway lead to a small square, with yet another café or two. We lost our selves! We simply couldn’t take enough pictures, even though they could not capture the charm of the place!

Now, once again starving of hunger, dying of thirst and melting away in the scorching midday sun, we aimed for shade, cold beer, ice cream and the cool waters of the azure Adriatic! We flopped onto the couches at the cafe and Dad ordered two ice cold beers, three ice creams and a large jug of water. Esto, feverish, nauseous and totally out of it plonked down next to me. I wet his hair a bit and fanned him with a brochure on the table. (Isn’t that what big sisters are for? I recon I need a big sister!) 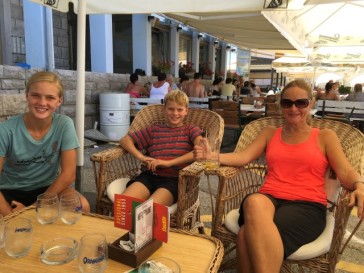 Relaxing in the shade

Being a big sister

It was such a relief and so refreshing to dive into the glorious water. It was crystal clear and the rocky bottom was visible beneath.  I couldn’t get enough of it! Even the salt tasted delicious on my lips.

We spent hours moving between the ocean and having cold treats in the shade. In my heart I wished this time would never end.