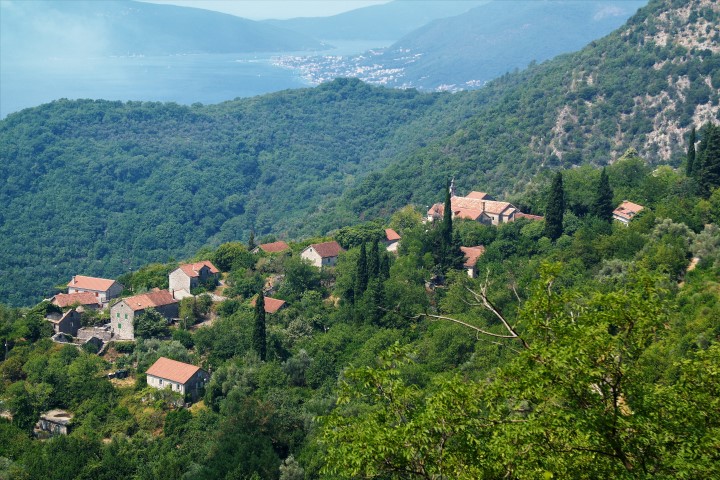 Birthday celebrations in the van Rensburg family start early in the morning. The birthday boy or girl has to be awakened by the harmonious voices of the rest of the family, then be whisked away to a breakfast of cake in a wonderland full of balloons and streamers before reading the selection of handmade birthday cards. Keeping to the tradition whilst on the road has been challenging, but we have managed thus far. We however changed country the day before Eulain’s birthday, which means everything we carry with us is reduced to the absolute minimum. This makes bus travel and border crossings much less of a hasstle. Unbeknownst to us, the little town we were heading to on the Bay of Kotor in Montenegro, was nothing more than three homes, a teeny-tiny shop and a ferry terminal – Lepetane. We chose it because you could apparently get connections from there to basically anywhere.

Because Eulain is a very early riser, we all got up before the crack of dawn to be able to catch her still asleep. Suitably surprised and after pouring over the cards (we all wrote her little poems), we very quickly moved on from the only cake we could find to a day full of adventure. (The cake was a somewhat stale wafer and chocolate-spread covered square that was high up on a shelf in the shop next door.) The adventure was to start with a hunt for decent cake in the waterside village of Perast on the other side of the bay. 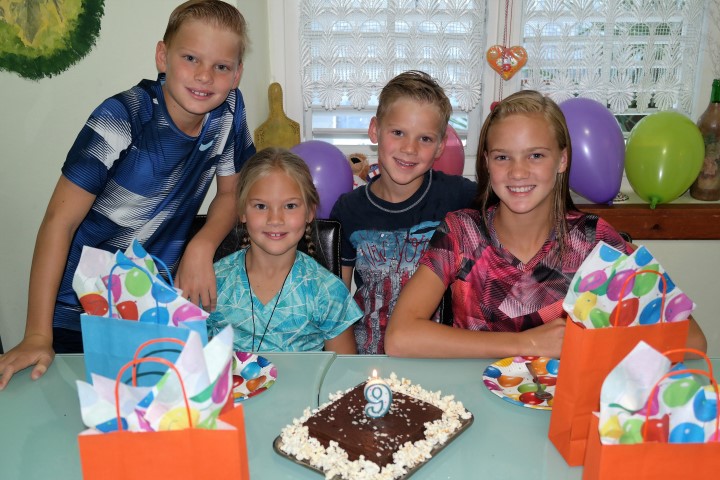 We crossed the bay with one of the ferries and walked to the local bus stop to wait for the next Blue-Line bus. After two hours in the sun and four buses going in the wrong direction, we gave up on the bus and decided to get something from the small supermarket and head back with the ferry to have lunch at our apartment. Our second attempt was to go to Kotor for cake in the afternoon. This time the Blue-Line bus stop was just 20 meters from our front door.

When the local lady that waited with us at the bus stop eventually waived down a taxi (after a good 90 minutes of waiting), we gave up all hope of catching a Blue-Line and basically hi-jacked the next taxi that we saw. Once in the beautiful old city of Kotor, Eulain and the other kids were rewarded with ice cream and the parents with a cold beer. We spent hours exploring the city in the magnificent golden glow of late afternoon light and ended the day with dinner in a square filled with the sound of street musicians. We took a taxi back home.

The next day was my birthday. Again we started with singing and cards when the night had just turned from dark to pale, but thankfully my surprise did not include cake from the little store next door. We started with a hike up into the mountains of the Vrmac peninsula. I was served breakfast in the shadow of an ancient little church on a peak overlooking the Gulf of Tivat. Coffee, ‘wellness biscuits’, baklava and a fantastic view. Perfect. 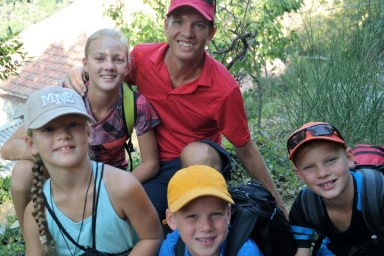 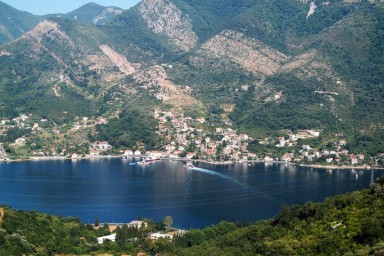 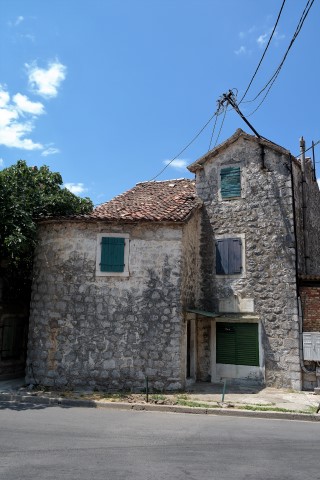 On our way down from the peak into the Gulf of Kotor (the other side of the peninsula), we hiked through the remains of a mountainside settlement that was abandoned centuries ago, a sleepy little hamlet and magnificent gorges catching glimpses of the shining ocean. After 15km or so, we ended the hike with lunch in a local konoba (“tavern”) situated right on the water (the boy at the table next to us leapt from his chair into the bay).  After waiting and eventually walking down the road along the bay, we managed to catch a Blue-Line bus to Perast (two actually, with a connection in Kotor).

Perast is a village lost in a different world. Artists set up their easels there. We accepted the beckoning invitation to cool off in the clear water of the bay. We also succumbed to the invitation to have dinner at a white tablecloth restaurant that included a magnificent chardonnay and sunset.

Seeing a Blue-Line bus in the distance coming closer to the town, we snapped out of paradise and waived to the waiter that we wanted to pay the bill. Too late. We relaxed again. The next one will be there in 30 minutes.

After 2 hours of waiting there was still no sign of the Blue-Line bus. And this time also no taxis to bail us out. Eventually the bus came around the corner, we got on, even though the driver said that he did not go where we needed to be. From some of the co-passengers we learnt that the last bus stop is about 5km from where we need to catch the ferry to the other side of the bay and our apartment. We end up walking along the windy road hugging the shoreline in darkness, except for Kali’s headlight that flashes red to warn oncoming cars of our presence. Exhausted we get back home 18 hours after we closed the door behind us.

We have coined a few new phrases during our travels thus far:

In Montenegro, we have added two more expressions to the list:

One thought on “Birthdays in Montenegro”