If I was to write about every single minute of our Amazing Amazon Adventure, I would complete an entire book. It was fabulous! These are a few of my many highlights during this crazy, wonderful, spectacular and amazing adventure…

Every late afternoon after the day’s exciting events, all the groups from the various lodges would meet at the large lake to have a relaxing swim and watch the sunset. The lake is around 5-7m deep and as brown as the muddy and swampy banks that surround its far edges. After being told that the caiman and anacondas roam these waters, and that the only security that I have from being devoured is the surrounding boats and people, I was at first terrified of jumping into the dark murky water with who knows what swimming beneath me.

I was standing at the edge of the canoe, when, after being in mid-air as a cannon ball for a split second, found myself swimming to the side of the boat. I quickly got used to it. It was loads of fun! Us children swam to the nearby boats to visit friends and sometimes coax them into the terrifying water. The water itself was nice and warm like the hot and humid jungle air outside. Mum and Dad had to literally drag us out of the water as it was getting quite dark and dinner at the lodge was waiting. The Sunset Swims were definitely one of my highest highlights.

On the first night, we went with Diego, our wonderful guide, to an area of the jungle to observe insect and spider activity. It was great fun to trudge through the mud with our gumboots and light our way with our head torches. Suddenly, Diego motioned for us to stop dead still. He pointed to a large hairy object less than 2m away. A tarantula! It was bigger, fleshier and much hairier than I had ever thought. I felt a cold shiver make its way down my spine as we all edged closer to take photos and have a look. It was scary and terrifying, yet at the same time exciting and pretty cool.

In the beginning of the Amazon Adventure, I had seriously considered having a tarantula crawl down my arm, then into my hand. However, all these ideas instantly evaporated when I saw the hairy beast.

We went to visit a local village by boat. As we approached, we saw a few timber cabins with nearby plantations and fruit trees. On the one bank, some of the local women were washing their cloths in the murky, brown river. There was a faint trail of soap making its way down stream. 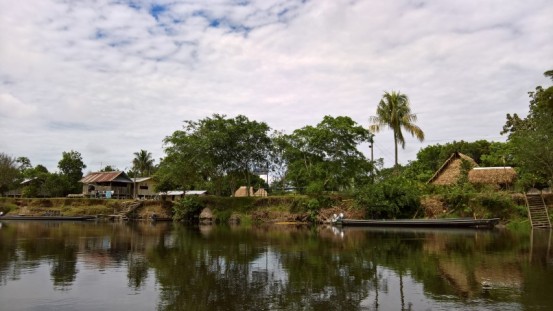 A local lady led us to a traditional structure known as the feasting place and kitchen. There was a wood fire burning and half a hollowed-out tree trunk lay near it. After a minute of fanning the fire, the lady grabbed her machete, slipped on her sandals, and led us to the yucca plantation. She dug around in the fertile soil, then motioned for the boys to uproot the tiny tree. After many grunts and groans, the boys looked proudly with red faces at the many yucca roots that lay near their feet.

The lady cut these off the tree, then expertly chopped off the ends, made a small slit in the skin, then handed each of us a yucca to start peeling. Her speed and accuracy showed very clearly that she had done this many times before.

After we had returned to the kitchen area, we all started grating the yucca. It was quite hard, for this was no ordinary way of grating. We sat on a bench in front of the hollow tree trunk, and with two loose metal graters, started transforming the stiff, hard yucca root into a sort of mash.

The lady scooped the mash into a net of woven bark, hooked it onto a pole, and started twisting it so all the juice dripped out. This made yucca flour. Next, she flattened it all out onto a clay plate that was hot on the fire. The flames licked at the sides of the yucca bread and after roasting for about two minutes, it became crispy. Making yucca bread is a very specific process, and once again the lady did it with incredible expertise.

We ate this, called cassava, with a tuna salad. It was very tasty! After lunch, the lady brought out some bracelets. They were made of all kinds of seeds and natural beads and held together with finely platted bark strips.  Mum and I bought a bracelet each. Every time I look at this bracelet, it will be a reminder of all the amazing amazon jungle adventures we had.

The Sharman or Jungle Doctor

After our village visit, we went to a special meeting place. There, in complete isolation, is a shelter, with a few wooden benches and a special chair and side table for the Sharman, or Jungle doctor.

The Sharman is dressed in a colourful outfit with many symbolic and beautiful accessories such as colourful necklaces made of seeds and other natural things found in the Jungle. He wore a feather crown and he even had a feather through his ear.

Before modern doctors, the Sharman or Jungle Doctor used medicinal plants, leaves, fruits and natural sources to cure the local people of various illnesses and diseases. Nowadays, though, he is mostly in charge of spiritual guiding and he helps make important decisions for the community.

We learnt about the many different rituals and traditions, and about the process of becoming a Sharman.  Diego painted our faces with the sap of a special fruit. I really liked it.  After the session, the Sharman brought out his blowpipe, and stuck a wooden model of a small toucan into the ground. Next, he slid his small arrow into the back of the blowpipe, and blew very hard. The arrow shot out the front and missed the target by a mere 3mm.

He motioned then for us to have a go. Everyone blew as hard as they could, aiming as accurately as they possible, but nobody got the toucan. Then it was my turn. I held the heavy pipe up to my face and looked through it. I could see the target, and so the Sharman slid the arrow into the blowpipe. Holding it to my mouth, I blew as hard as hard as I could. When I looked at the toucan, to my astonishment, there was the arrow, stuck in its neck! They even struggled to pull it out.

is a highlight for me, because I really loved learning about the traditions and rituals of the local people and the Sharman. I also enjoyed shooting with the blowpipe. The fact that I got the target straight in the neck, is a miracle. 😜

It was so much fun to sit back in the motorised canoe, and search for wildlife, hidden among the jungle rainforest and the banks of the river. I do not know how Diego and our captain could see the wildlife so far away, so tiny and so hidden, all with the naked eye. I would be right next to the animal sometimes, and still I would not be able to spot it!

In total, we saw 9 out of the 10 species of monkey, the toucan, caiman, anaconda, more than 15 species of birds, the tarantula and many more. It was amazing to see all these animals and insects, not forgetting the Spiders!

In these pictures, we are waking through swamps and tasting acidic ants. What an adventure! 😆 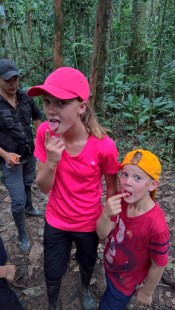 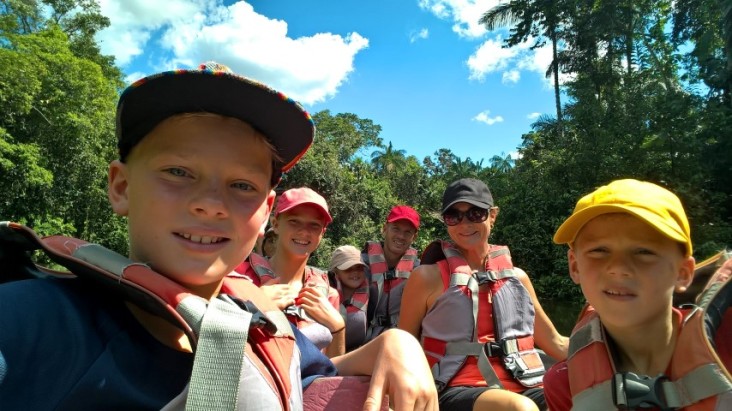 All in all, I absolutely loved our Amazon Adventure! Around ever river bend, up very tree, awaited a surprise you thought you would never in your life experience. I would do it all again anytime! 😀